I was casting a weary eye around the breakfast lounge at the Hampton Inn, Alexandria, Minnesota, tired and achy from co-sleeping with a croupy three year old, when I felt an overhwhelming need to re-read Pickwick Papers, or return to Moby Dick, or find other books with ragamuffin travelers gathered in unlikely places, stranded by weather. This must be in nearly every Victorian novel, but for the life of me, I can’t put my finger on which.

I suppose the first part of Lord of the Rings would qualify, but I’m thinking darker, less quaint.

Oh wow, excelllent topic! Immediately thinking of The Heart Is a Lonely Hunter, Carson McCullers’s heartbreaking 1940 novel of a deaf man who moves into a boarding house in Georgia. I read it so long ago, middle school, that I don’t even remember most of this summary from the NEA Big Read page:

A very different and utterly joyous long read is Armistead Maupin’s Tales of the City, set in a San Francisco apartment building run by the memorable Anna Madrigal. The small building has the feel of a boarding house, and everybody is up in everybody else’s business. It was originally published as a serial in the San Francisco Chronicle back in the ’80s, so it goes on and on, with short chapters in which much happens.

One more: Joseph O’Neill’s Netherland, much of which is set in New York’s legendary Chelsea Hotel, which combines hotel and apartments. This is a novel all about isolation, trying to keep a family together, and trying to find home.

I’m so glad you made these suggestions, in part because I’ve heard of the authors but haven’t read them, but also because my boarding house stories all came from before the 20th century! Time to update!

A couple more that popped to mind:

-Anne of the Island, or is it Anne of Windy Poplars, who boards in a house so covered with cushions that she cannot make it up the stairs without toppling them over (now, as a fiber arts enthusiast, I am less in sympathy with Anne).

-This is a stretch, but Crazy Heart, a series of lonely roads and lonely bars and lonely bowling alleys. I loved it even more than the movie. It has a significantly better/bleaker ending, to boot.

-OMG! David Foster Wallace’s A Supposedly Fun Thing I’ll Never Do Again, about the bleakness of the cruise experience! Such a motley crew! So dreadfully, wonderfully boring!

-The Enchanted April by von Arnim, much like the movie, so it skews romantic, but very much about different women staking claims in a rental villa.

-Jane Eyre, of course! When she runs away and meets her cousin/paramour St. John!

An interesting theme that I normally wouldn’t consider-- the closest I can think of are mysteries, e.g., Agatha Christie’s And Then There Were None, and Murder on the Orient Express.

What a great topic. The first comes that comes to mind is The World According to Garp. While in Vienna with his mother, Garp writes his first novella that is set in a very low budget hotel. I loved it!

How about Jamaica Inn by Daphne DuMaurier? It was made an Alfred Hitchcock movie of the same name. It’s about an orphan who goes to live with her sole surviving relative in Jamaica Inn on the British coast that is the haunt of wreckers who waylay ships and steal cargo. It’s dark and haunting and scared the dickens out of me when I was a 'tween.

The Enchanted April is one of my favorites too, and so is Jane Eyre. If you want to go super dark and creepy there is always The Shining, technically it takes place in a hotel, not an inn or boarding house, but it is really good.

Pilgrim’s Inn, by Elizabeth Goudge, is an old-fashioned novel about a family who makes an old inn its home, preserving its origins, in a way, by welcoming a curious mix of strangers and relatives. I often reread this book at Christmas time. It has lots of good ingredients–kids, romance, a bit of near-magic, redemption, and, oh, yes, a Shakespearean actor / RAF pilot hero.

Miss Susie Slagle’s is another old-fashioned book, about a boarding house for John’s Hopkins med students–I think. I read it in bits many, many years ago, during long Sunday afternoons at my Nana’s house. The adults were all occupied with football, Scrabble, and chit-chat, and I don’t think they ever noticed the semi-inappropriate selections I was making from Nana’s book collection.

It’s set in an apartment building rather than an inn, but 44 Scotland Street, by Alexander McCall Smith, uses the same conceit as the hotel / inn books. Soooo funny . . . Bruce the gorgeous narcissist, Bertie the sad little-boy saxophone virtuouso, Irene the uber-PC smother mother. The succeeding books in the series move their boundaries away from the single address but definitely maintain the comedy.

@rabrevitz Fantastic! I have never heard of these books! And thanks for featuring women authors. And AMSmith is always reliable. I’ve read quite a few of the Isabel Dalhousie series.

@kagleslie I think I should pluck up the courage and read some Stephen King this year, if nothing else, as a master class for writing enduring American novels. I’m trying to finish a novel this year!

@bookie1510 You know, I’ve read Rebecca and I loved it. And I LOVE seaside books and movies. Have you seen About Time? Gorgeous seaside home in that one.

@kjt1211 Sounds right up my street: first novella (my book was technically a novella until I cranked another 13000 words recently), low-budget travel. Thanks! I think I let the images of the movie obstruct my interest the book.

@jrs Orient Express is a perfect example of this sort of thing: people thrown together in an interesting location. I read it a million years ago and mainly I remember the beautiful paperback artwork featuring the cast of the movie: 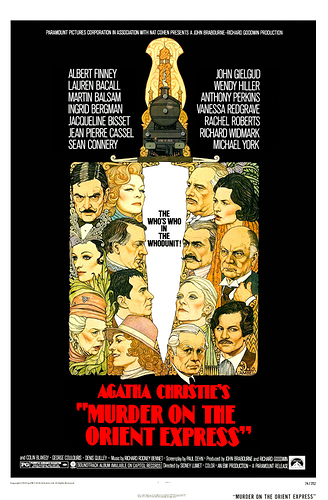 @Ann1: a tangential question, and one I could google, but it’s so much more fun to chat. Does “Big Read” mean community audiobook? How long has this been a thing? I’ve just started listening to audiobooks because I have a toddler now, and the cost and library availability has become an issue. The NEA website was exciting! Okay, off to google.

I was going to mention 44 Scotland Street, and the sequels. So funny, and so much evident fondness for people and their foibles. Accirding to the Forward this also began as a sequel–after meeting Armistead Maupin at a party in San Francisco!

Patrick Hamilton’s ‘Slaves of Solitude’ centres around the relationships made in a boarding house. It’s set in London during WWII, and by the end of the novel both the city and the conflict seemed to me to be as real as the characters were.

Stephen King, the storm. The community comes together during a nor Easter, being Stephen King, a bit scary but I really loved the movie.

pbs. The durrells of carfu. Family moves from England to Greece or turkey. Family adventures,

Thought of another one, Mrs. Palfrey at the Claremont, by Elizabeth Taylor (not that one). It’s one of the best studies of aging I’ve ever read.

That reminds me that I have a copy of Quartet in Autumn lying around. Do you like Barbara Pym? She also does a lot with boarders, single people thrown together as roommates.

What about a classic like Jamaica Inn? Not exactly about visitors as such, but definitely set in an Inn. Or of course there’s Treasure Island.