The new book, People Knitting, features images from days gone by. Do you have photos of knitters in your family? We’d love to see them.

Not my family, but I came across some photos when working on research for the Nordic Knitting Conference a couple of years ago: 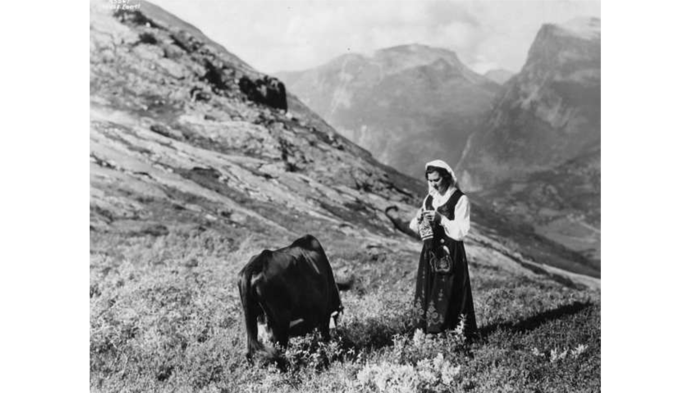 By Anders Beer Wilse, taken in 1937 and most definitely staged (she’s wearing a regional folk costume, used today for big events like baptisms, graduations, and weddings), but still pretty brilliant. This is in Møre og Romsdal in Norway. From the digital collection of the Norsk Folkemuseum: https://digitaltmuseum.no/011013307616/sunnmoresbunad?count=254&pos=174&sort_by=&page=8&js=1&type_filter=Photograph&query=strikking&Photograph_subject_filter=Strikking&rows=24&search_context=1

I learned to knit just before Don and I left for a month’s diving vacation on the island of Bonaire in the Caribbean in December 2007. I had a pair of Bryspun nylon needles and a skein of dishcloth cotton so I cast on about 10 stitches, tucked the needles and yarn into a zipper plastic bag in the pocket of my buoyancy vest, and found a bare spot in the sand next to a reef at about 30 feet. I only knit a couple rows, just for the pictures but I still brag that “I can knit underwater.” 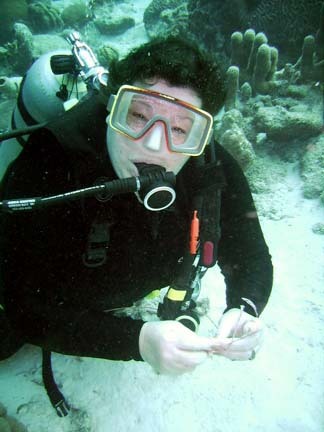 When I asked my son what he wanted for his 32nd birthday in 2010 he said he wanted to learn to knit so we made a date and he made a dishcloth. The next week he wanted to learn to use DPNs and made everyone a coffee cozy for Christmas. He’s too busy being a husband and daddy and starting a craft brewery but he’ll get back to knitting, I’m sure, once he has more than three minutes to sit still. 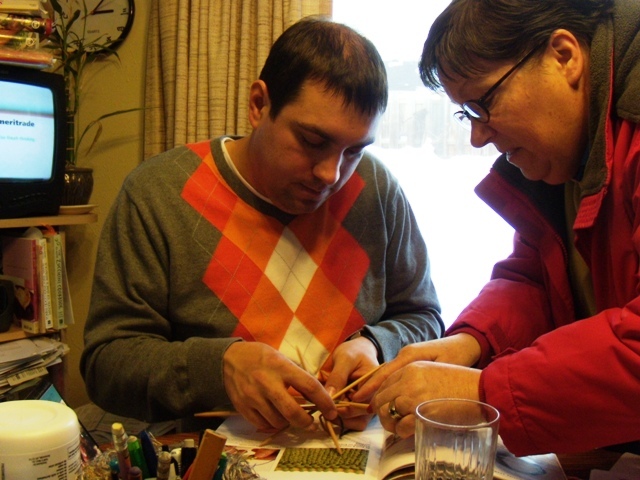 My daughter asked Mom to teach her to knit in 2006, made socks, and motivated me to put down my crochet hook and learn to knit. One weekend she showed me how to use DPNs and we each made a glove then made the second one on our own. 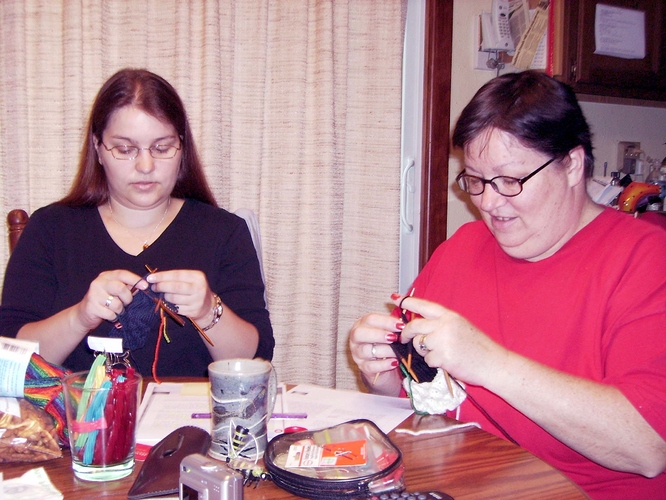 And here’s Mom, who taught Ann to knit, who taught me to knit with DPNs and be brave enough to knit gloves and socks, who taught David to knit. I can’t wait to teach the grandchildren to knit. Right now they’d either poke their eye or gnaw the needles. This was Mom’s last project, a capelet to wear in chilly restaurants while playing bridge with “the old ladies.” She died before she finished it. It took me about 18 months to face finishing it and I wear it on chilly nights when I’m on the couch knitting or sewing. 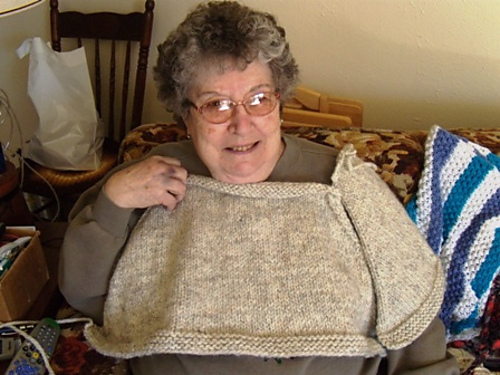 I’ve been trying to figure out where exactly in Seattle the woman walking and knitting was. Any ideas? (I’m not going to try to recreate it; I can barely play Pokemon Go and walk at the same time, so knitting is right out.)

I have only been to Bonaire once, but loved diving there. Didn’t knit while diving though. Kudos to you!

Terrible photo of a framed photo, but my parents bought this for me a few years ago. An older woman knitting on the side of a building in Italy. 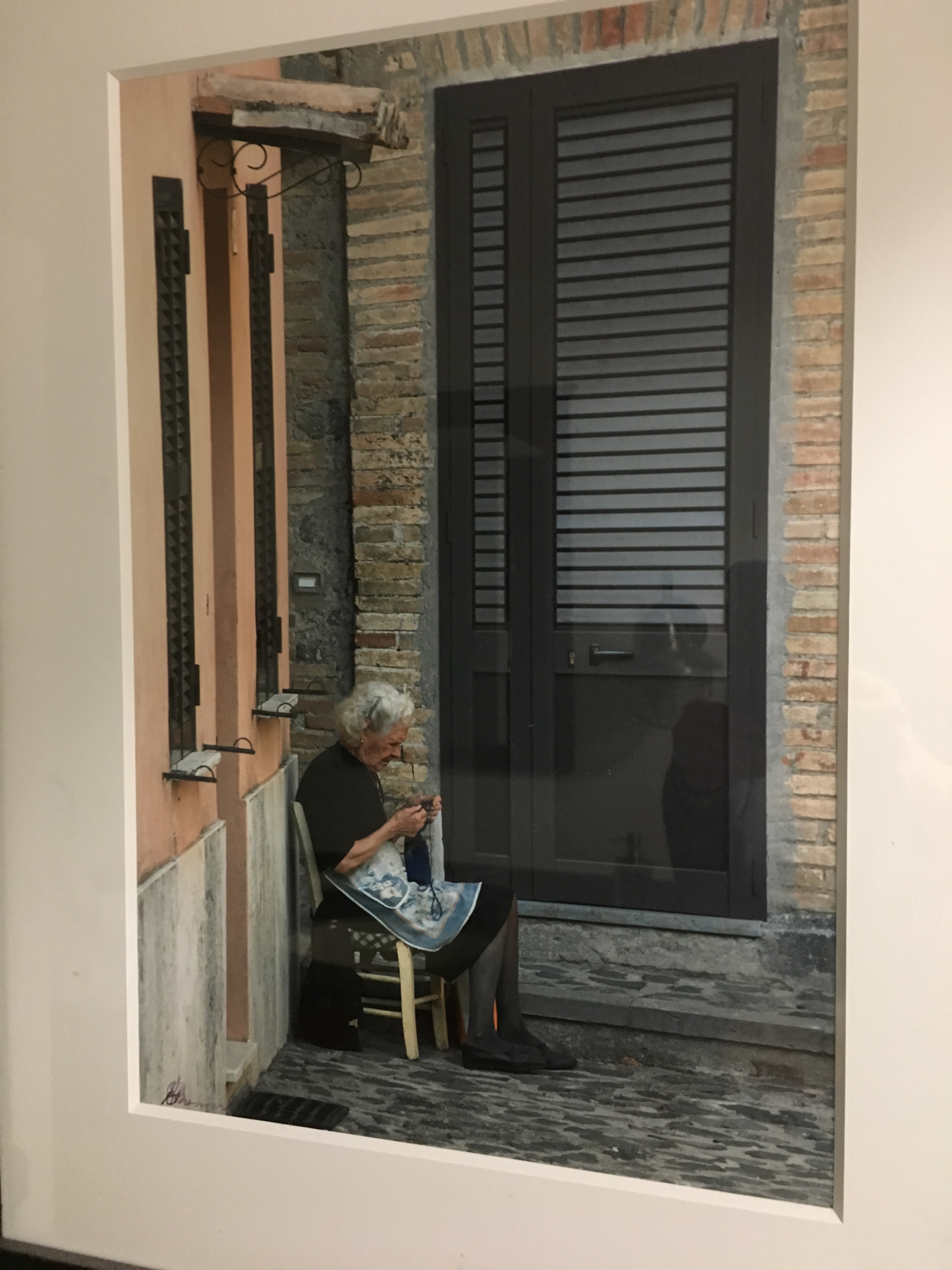 I wish I was in Bonaire right now as it’s Zero here right now. Well, not here here, I am indoors but you know what I mean. 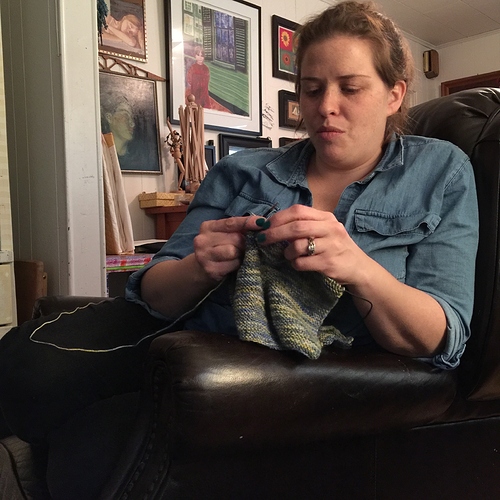 I’d love to see the photo; can you point me to it? Thanks!

I think I found it - light colored knitting, probably from the early 1900s? I’ll ask my dad. He’s 92, was born on a dining room table in what is now the Crown Hill neighborhood. I was born and raised in Seattle, too. All I can tell from the lamppost and the building behind her is it’s probably First, Second or Third Ave, possibly around Pike/Pine. But I could be totally off the mark.

I tried a reverse image search in case it was from an archive online, but no luck, just the AtlasObscura post on this book. 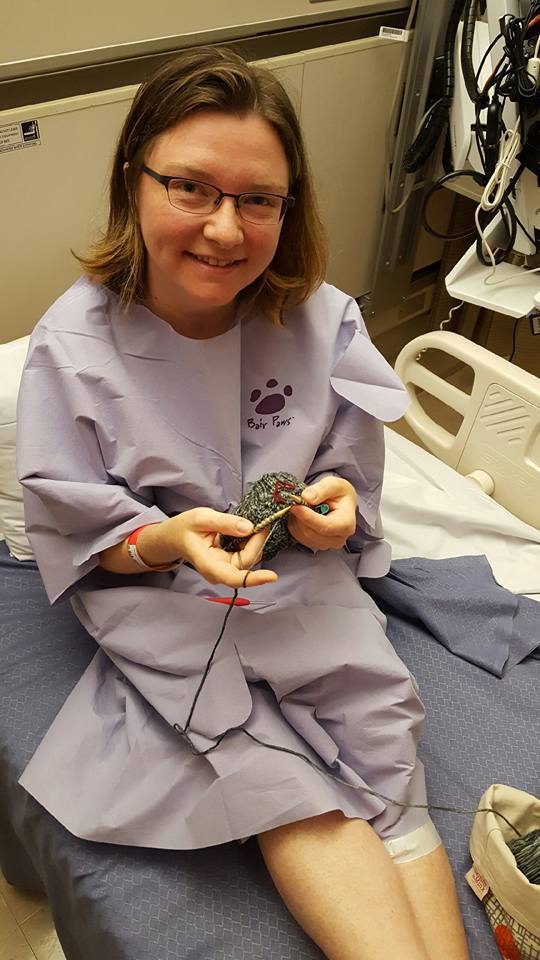 Knitting pre-op! I’m well, and it was a preventative surgery, but it was a fantastic way to calm myself while I waited.

As the good Ms. Zimmerman says, “Knit on with confidence and hope, through all crises.”

Have you watched Fruity Knitting podcast? They have a feature on #extremeknitting. 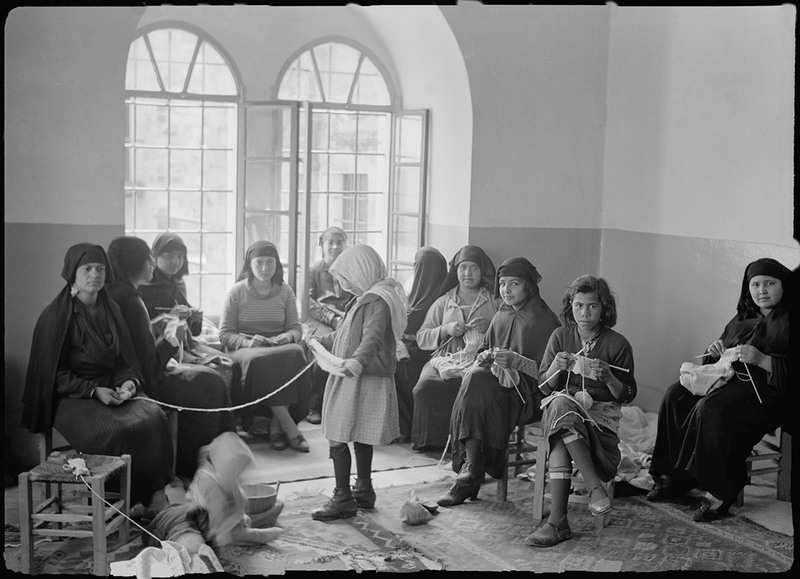 The girl second from the right looks like she’s saying “Really?!! I’m counting!”