Have you seen it yet? Boom! 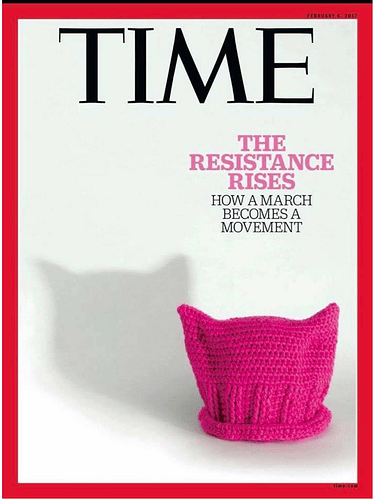 I can’t wait to get one!

Being a knitter, I wish it were a knit pussy hat, but that is a very small complaint. The best thing is that “that hat” is a symbol of our RESISTANCE.

Wow, I didn’t even notice at first that it was crocheted!

Wow! I still have some pink yarn left (but not for long) if anyone is looking.

I don’t know if you saw the tweet from Trump’s lawyer asking if the pink hats were made in the USA.

There was a great response on Buzz Feed that noted, among other things, that the crocheted hats in the photo he referenced HAD to be handmade (crochet machines don’t exist yet) and given the short turn around time were made domestically and not by a company.

By the way, my personal hat favorite thus far is Resist by Donna Druchunas.

I made the hats for people attending marches in San Diego, Columbia, New Orleans, and Washington. I am a machine knitter, and if you are, too, and want the pussyhat pattern for knitting machine, I will send it, or post it. I continue to make the hats because people continue to request them.

Women have a voice and the vote.
Trump cannot hear us…yet

The hat has made it to the cover of The New Yorker magazine, too. 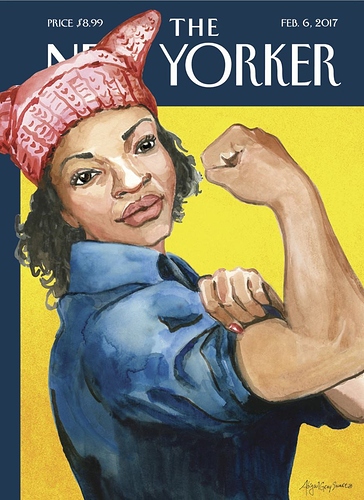 If you’re interested, I blogged about the hat and the march, and included links to Abby Franquemont’s Buzzfeed piece, NPR’s piece, and MDK’s piece (but you know about that one). Blog post here

Awesome. I am late to the party but I have a skein of Madtosh in dk rose amethyst that’s “earmarked” for a hat.

This “Resist Hate, Bigotry, Homophobia, Sexism, etc. Party” is, unfortunately going to go on for awhile; jump in and knit.

It just goes to show you, a few voices, joined with a few more and so on and so on can move mountains. We need to keep our voices heard!

I was in my LYS yesterday and people were still buying yarn for more hats. Several were working on commission for non-knitters. In most cases the offer was to be paid for the hat (in the range of $50-100) plus a donation to be made to a nonprofit of the knitters choice. The most interesting request I heard was a man who wanted a pussy hat that he could wear on his bike helmet.

I never gave a thought to what would happen to Pussyhats beyond the march(es) on January 21st, but clearly they go on... Anais, recipient of one of my hats at the DC march, is a social worker at an alternative...


I knit three Pussyhats to send to marchers in DC. I heard from two of the recipients, both of whom also send photos from the march and granted me permission to blog. One of them, Anais, is a high school social worker and has written to me further about her hat (link to blog post above).
8 Likes
juliest February 1, 2017, 8:29pm #17

I’ve given away 12 hats so far, one more on the needles. I have a lot of stash and all the pink is being used up. Go, stash-busting
Julie in San Diego

I think we are going to need a bigger boat! Remember that line from Jaws?
Everyday the news gets uglier and uglier. Knit, make calls. Call a lie a
lie and work for justice.

I squee’d out loud when I saw this. It’s my new desktop wallpaper.

I didn’t know people wanted more of these. I still have pink yarn and (I hope) I can crank them out on a knitting machine. I’m so glad you all posted.