The Eddy Wrap, from Julia Farwell-Clay

#teamKayColorway LOL LOL LOL (I added the LOLs because the Lounge, in its wisdom, will not take posts with fewer than 20 characters!)

I’m dithering between Patina and Kay’s Colorway even though one of them is MY OWN DANG COLORWAY. Patina is even prettier in the skein than it was when Julia was putting little shade card swatches together.

Isn’t gauge amazing? I will probably have to go down to a 6 to get gauge. If I were trying to get gauge. I agree that it’s a matter of getting a fabric you like for this wrap.

It would be hard for me to choose between the two colorways - I loved knitting the little bit that I did and have added making the entire shawl to my to-knit list, @juliafc

Thank you for your advice! Will forge ahead with the size 9 needle because I like the feel of the fabric

Cast on last night with color Steel Cut Oats. The Kay color palette reminds me of an Oak forest in Fall…a happy thought on a 90 degree day!

How thrilling! I get a little zing when someone tells me they’re starting on a pattern I wrote. Thanks for making my morning!

I completely agree. I think it’s about getting fabric you like. The trick is matching the fabric to the size of the pattern which is critical in sweaters, but for shawls, hardly at all. As long as you end up with a size that is wearable, you’re good.

I should show you a photo I took about ten years ago during one of the very first internet based mystery shawl knit alongs authored by Melanie of Pink Lemon Twist patterns, when Stephanie Pearl McPhee and I compared our versions of the same shawl we were knitting, both of us following that logic of “fabric I like”. 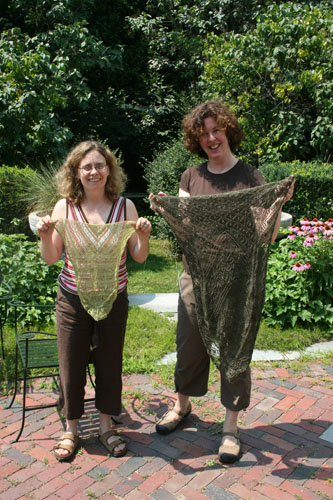 We were terribly amused since as you can see, the shawls were so different in size, and yet perfectly in scale to our respective ::ahem:: statures. Ah, the vagaries of gauge! The shawl ultimately became known as Swan Lake, which is still very knit able – no mystery involved at all.

I have 2 shawls and a baby sweater so close to being finished I can’t quit on them now (especially the baby sweater - I don’t want the baby to outgrow it before she gets it!). As a result I’m winding 1 hank of Eddy yarn a day. It holds off the startitis a bit while I try to finish these other things. Send thoughts of persistence my way - please knitters. Happy Knitting - have a nice weekend all!

I received my beautiful yarn (Patina colorway) on Thursday and have (kind of, gulp) read through the pattern. I don’t always like to read ahead because In practice I usually find things make sense as I go…not too good visualizing ahead of time. The yarn is entered on Ravelry and Eddy is #1 in my queue just waiting for the magic click of “cast on.” I’m working furiously on the sleeves of my current sweater because I’m determined to finish it before casting on the Eddy. However, I could wind the yarn now…and I’m allowed to knit a swatch while still working on a project so…small treats until I can cast in those first four stitches!

I’ve just realized that it’s kind of a Sock Monkey colorway! Which is not a bad thing! 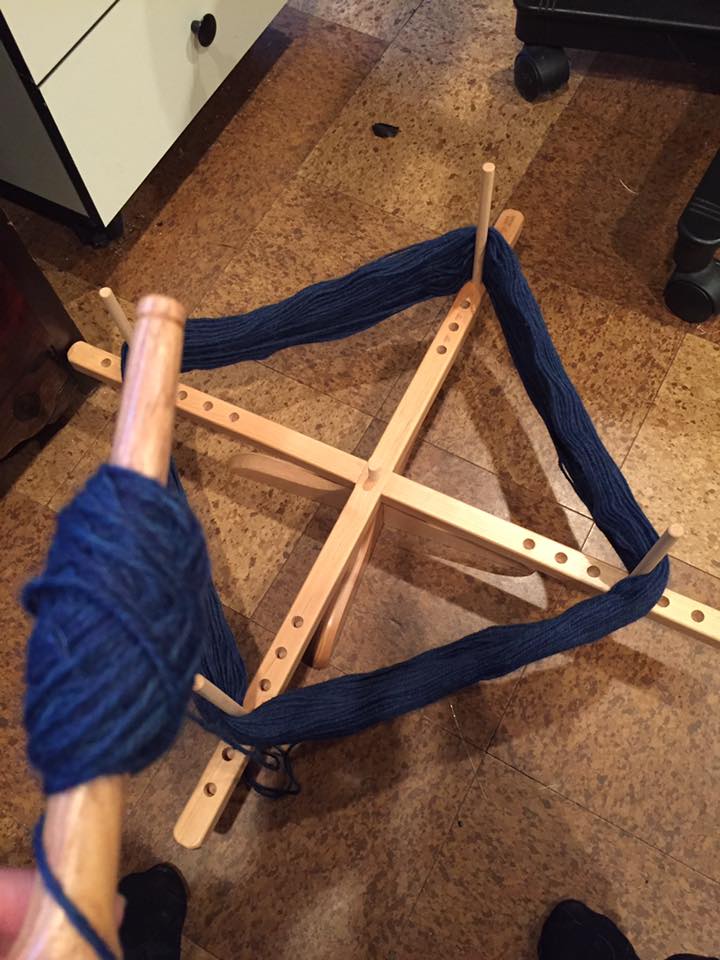 Hmmm…I do have a cute pattern for sock monkey mitts and a matching hat if you want to go that route😊
I think I’ll stick with the Fall forest theme though, and swap out the Salt and Pepper for the Peat mix for a touch of green when I do the shells.
In the meantime, I’m enjoying some mindless knitting !

The base of the shawl should be familiar to you, Nanci, if you’ve ever knit a triangular shawl before. Put your hand up if you run into trouble, I’m paying attention. I just bought one of those hands free phone holders so I can do a little video of the short row technique in the near future. It looks like something from a dentists’ office, but I think it will do the trick! 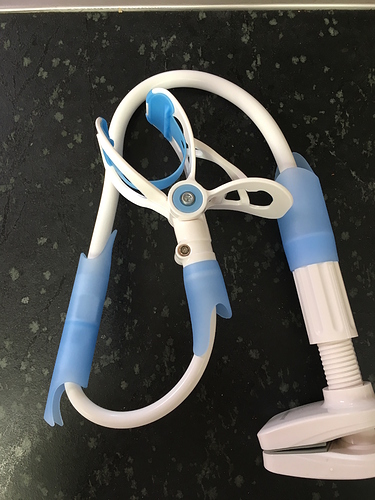 Thank you! I’ll be fine until I get to the shells although once I get going on those I’m sure I’ll be fine there too. It’s always the first time doing something that takes a moment for me…interpreting instructions. I have done short rows three times, all different versions from one another but I was successful at them, and even intarsia although that was a lifetime ago. I love the sweater and hat that you made using your scalloped shells so I hope that those will become patterns down the line. And I’m only one sleeve short now of being able to cast on. Sleeves are supposed to go fast but gee whiz, it seems like it’s taking forever, despite the fact that I have short arms!

Nanci, I think you have the hat and sweater knitter confused with me. I talked to Natasja Hornby, the knitter featured on the front page of Ravelry, as she was knitting, and I’m delighted to say my article here on Mason Dixon Knitting inspired her to actually make the project a reality, but I cannot take any more credit for those projects than that! This is Natasja’s sweater, and this (to be clear) is mine! (here’s another angle of my son holding his breath while I photographed a finished sleeve seam!) Stay tuned to September 3rd here on the main site where I’ll model the final sweater!

And thank you for making Eddy a reality in your life! I set the video holder up this morning to see how well the things works! All is well. 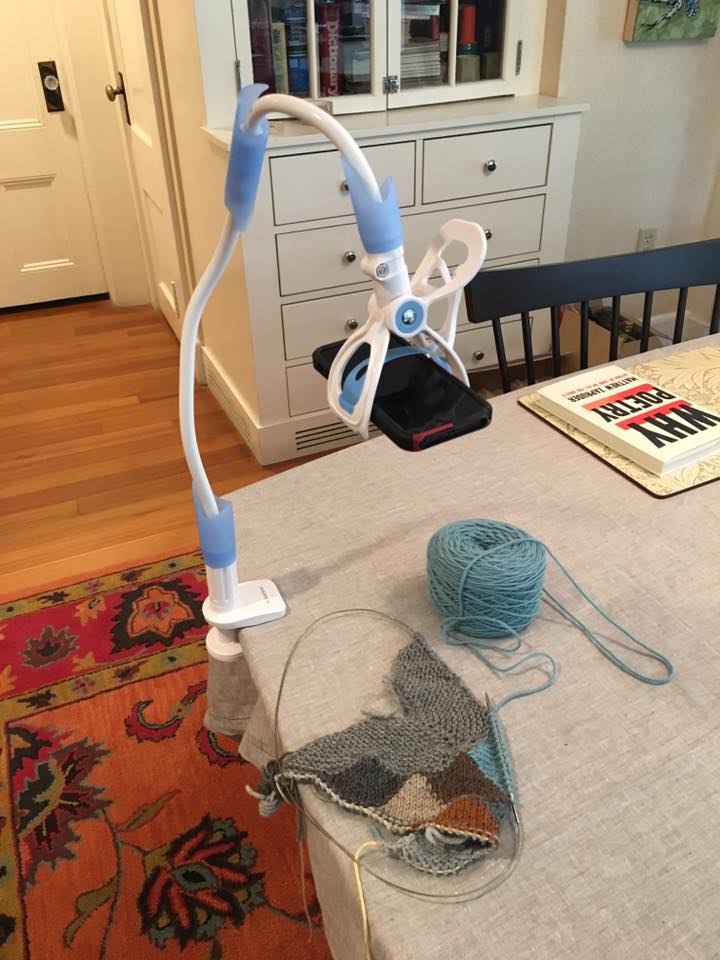 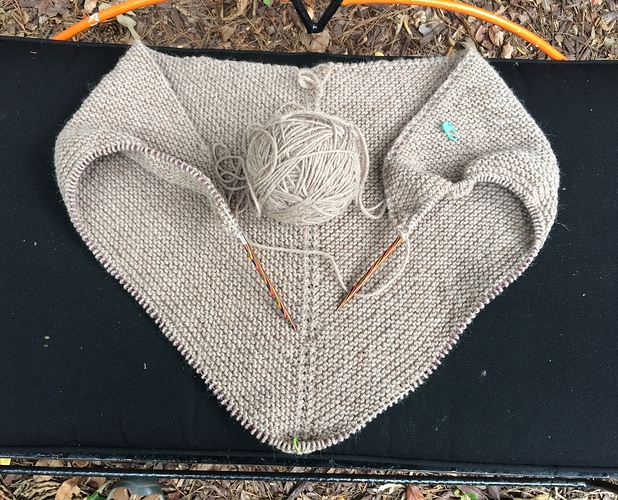 I’m three rows away from starting the scalloped edge. Will not do more tonight but likely tomorrow…stay tuned!

Both sweaters are gorgeous. I will stay tuned for a pattern eventually. Which is why learning the technique with the shawl is important. Not to mention having a lovely piece to wrap in for warmth this winter and to also show off when it’s finished, at one of my Fiber Arts Guild meetings. It’s always fun to have something for our show and tell segment. Still working the endless last sleeve on my California Coast sweater before I can cast on. Hampered a bit by two quilting projects with September deadlines, taking up time so only knitting in the evening right now. Good thing I’m retired. I’m loving being able to fully involve myself with creative endeavors.

Ooh…I want to be where you are!

I’m only at this point because I shamelessly abandoned two other projects to start the Eddy Wrap. Learning to do Entrelac drew me in, but now that I’m almost at the shells it may take me a long time to understand and absorb the directions.
Should be a great adventure! Julia, I think your video setup is about to get a workout!