Last night my mother and I went to the opening of the new installation at The Hudson River Museum here in Yonkers, “Wyeth Wonderland”. The French photographer Josephine Douet, “walked in the footsteps” of Andrew Wyeth, mostly in Pennsylvania with a bit of Maine thrown in, and her photos are being shown with several of Wyeth’s watercolors. It’s an interesting exhibit–comparing and contrasting the vision of two artists interpreting the same space.

I have always been a fan of all of the Wyeth’s but the controversy around the Helgas in 1986 was fascinating to my teenaged self. If it never hit your radar, a cache of 240 works by Andrew Wyeth of his neighbor, friend and, clearly, muse Helga had been created in secret over almost two decades. Were they lovers? Had he cheated on his wife? Why were they secret? There were a few interesting articles in which Wyeth’s wife was interviewed that are quite interesting to read. She speaks of the best of her husband’s work being clearly based in the Helgas and that she thought they were fantastic. In so many ways, it was publicly interpreted as a real Stand By Your Man moment in the art world.

What got to me about it was the total absence of information about the true Helga. The strength of Wyeth’s marriage was questioned and speculated about but not hers. Very little was shared about her. It seemed so dismissive. But the paintings and sketches are of a very complete women. Her presence in the work needs no explanation or conversation–she is simply there, fully formed and confident in her space.

Until last night, I assumed that much of that was the brilliance of Wyeth. However, Douet photographed Helga now. Depending on which google hit you believe, she is somewhere between 78 and 83 years old. For a second artist to capture that wholeness of a woman is astounding and, for me speaks truly to Helga and not to the people who have captured her image. Frankly, the contemporary photo of her is so moving that I actually cried.

After reading Juliet Bernard’s piece here on MDK, I have spent the past 24 hours thinking about the invisibility of Helga in the controversy around the paintings and wondering about what she would say about this whole post.

I’m going back to the museum tomorrow afternoon for a tour of the exhibit with Douet and I plan to ask her about her interactions with Helga.

This post may be a little rambling and not at all about knitting but there is something about this experience that speaks to me very strongly about the invisibility of women. Particularly when looking at a woman who became so visible.

If anyone is in the Yonkers area on Saturday afternoon and feels like coming, I’ll be the woman crying in front of the Helga photo. It’s a short walk from the Glenwood Station on Metro North.

I can’t be there on Saturday, but you have really piqued my interest! I have been to Brandywine many times and I have always wondered about Helga.

This beautiful review prompted me to look at the Helga story once more. I thank you for sharing this encounter with sounds like a lovely show. Any chance of sharing an image of the Helga photograph?

This is the closest I have right now. According to Douet, Helga is quite extraordinary 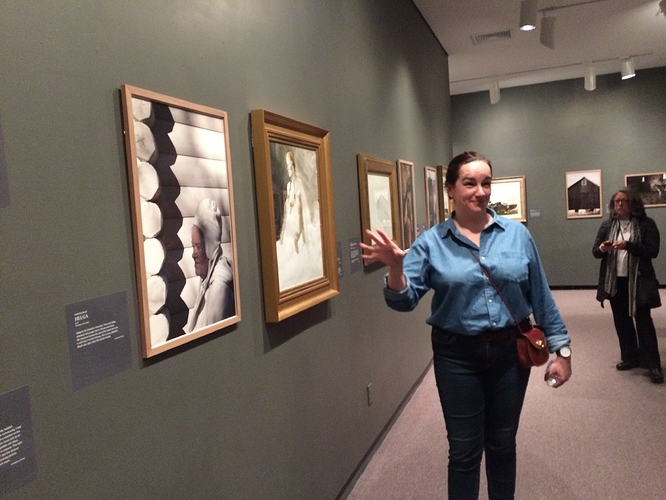 I am going back with my team from work so will get a better shot.

This is the first time she has sat for an artist since her last sitting with Wyeth in 1986.

I have always loves those paintings. They influenced my earlier efforts of portraiture.And when you learn they were done with tempura, it makes it even more remarkable as this is a difficult medium to master.

Speaking of women’s fashion, have you read this book review about women’s dresses over the centuries?

I just requested that our library get a copy. @Ann1, this reminded me of your fashion runway reviews.

Going to have to check this one out!