Startitis: I Hear It's Going Around

Is anyone else suffering from Startitis? I’ve got a wicked case of it this year.

I usually have it this time of year. A new year, must start all the new things! But not now, I currently only have two things on my needles! Thats not like me at all. If your startitis is contagious I hope to catch some!

Thought I would have (and even set up a few projects ready to go), but I’ve got finishitis instead. Absolutely on a roll with tying up loose ends and finishing projects.

Weird. It’s only a matter of time I’m sure before it switches to startitis.

I get finishitis every January. I try to take advantage of it because it is the only time of year I get it. 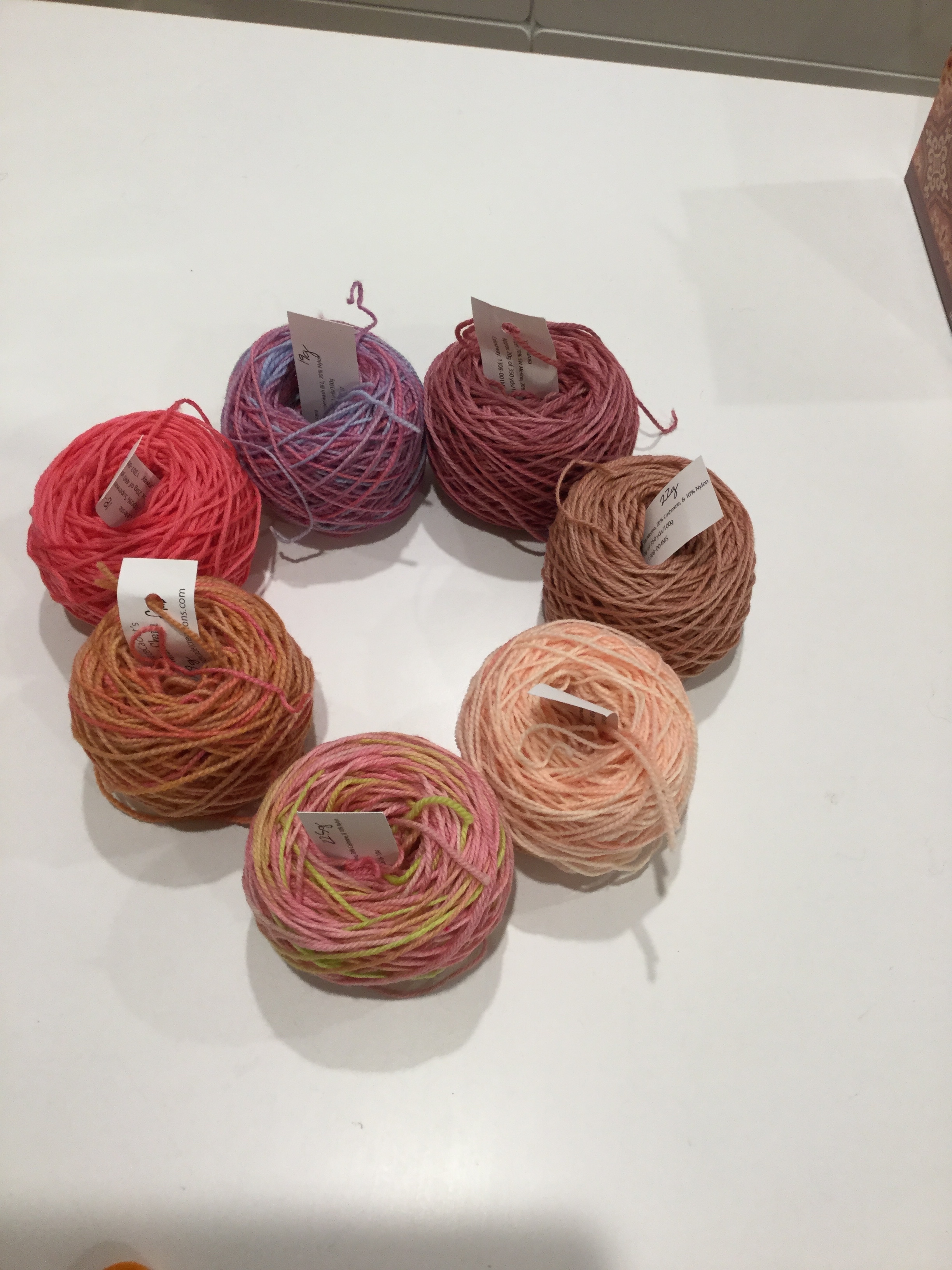 I have less than 2 hours knitting left to do on a cowl/gaiter for my youngest son, and then I will swatch for a sweater test knit that is likely to take me 2-3 weeks to complete.

If startitis gets bad, I have a few mini (3-4 hour) projects that I can knit to soothe the itch.

I’ve been doing a sample knit for the past month, and I’m nearly done - it’s been a very pleasurable knit, but I can’t wait to start something new. The good thing about all this time knitting one big thing that I can’t stop is I’ve had plenty of time to think about what I want to do next. I have a tendency to get caught in the yarn fumes and cast on things I don’t really need. So come next weekend, I will be starting a pair of mittens, a double-knit headband (I hate double-knitting, but I can deal with it when the finished product is worth it), and a swatch for a red cardigan. So exciting!

What a gorgeous palette for that test-knit cowl.

Thank you so much. These are not my colors, so it will go in the gift pile.

I am really pleased with how it looks so far. I just started my 4th color. 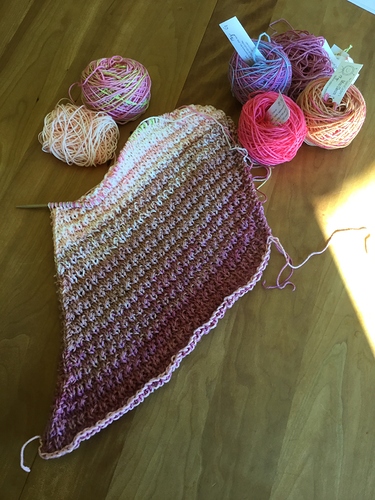 I finished my son’s cowl this morning, just in time for him to pack it for his early morning flight tomorrow. 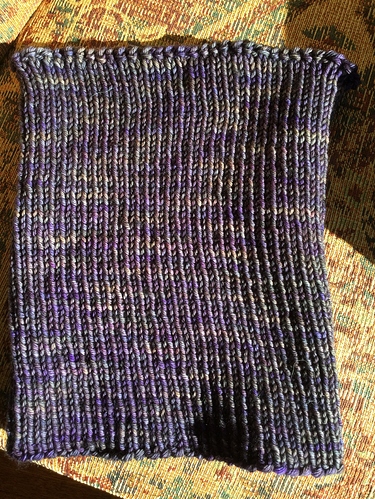 Nice color on both f your project. I can’t wait to see it finished.

What pattern for your red cardigan? I have red yarn wanting to be a cardie , but can’t quite figure out what I really want it to look like.

I haven’t figured out the patten yet. I need to pull the yarn out from under the bed and bring it to the computer to search on Ravelry - somehow that hasn’t happened yet. (The yarn is a beautiful wool/silk blend from the early 90s, I think, given to me by a friend who used to own my LYS and is now trying to downsize. I have been the grateful recipient of pattern books and magazines as well.) I think it’s a sport-weight? I want something very simple that I can use for layering and wear to work. Snug fit, crew neck, mostly stockinette with maybe some cables near the button bands. I have a pretty strong picture in my head of what I want.

I’ve got a bad case of Startitis. One of my traditions every year is to organize my stash. It never fails that I find yummy yarns that will go nicely with new patterns that I’ve found on Ravelry. So cast on and start I did. One sweater for me and one baby sweater.

Yea - I fell off the WIP wagon over the weekend and started a hat (probably will finish it as a Pussy Hat). Didn’t take the edge off my startitis though. I’m itching to add to my WIP shawl pile with another 1 or 2 or maybe a Crete cardigan or some Squad Mitts or . . .

I’m planning the big Stash Toss for this weekend and I’m getting the feeling It’s going to be a lot like this!!

Yeah it’s a little scary. I need a shot of finishitis.

I made a bonehead move on my wish list for Webs this year so I was gifted some beautiful yarn for Christmas that I had no need for. Luckily, my boyfriend’s buddy Artie just found out that he’s going to be a grandfather. I couldn’t think of a better person to get a hand knit gift and the mistake yarn is perfect for it so this has been cast on. http://www.ravelry.com/patterns/library/baby-hooded-wrap-and-roll-blanket
I’m making it without the strap because I believe that new mothers don’t need something that doesn’t do something to make their life easier. When I first met Brian (the BF) he always talked about Artie and had the craziest stories but for a variety of reasons (no falling out or anything–just life being life) they had lost touch with each other. The day I found Artie was a turning point in our relationship. We’ve been in almost constant connection ever since and I simply adore him. He is quite the wildman and it turns out that all the crazy stories were true! He is also kind and fun and a true blessing as a friend.

So I don’t feel guilty about this one.

I do feel guilty about the pair of squad mitts that I am halfway through and the socks that I started for my mom, and the socks for my friend Kathleen, and my mom’s hat, and her scarf, and the poncho from the new Norah Gaughan book that I cast on for my niece (p.s. the book is fab!) and, I think you get the picture.

In the spirit of transparency I have one sock left to knit from Christmas that I haven’t done a damn thing on.

I have startitis and frogitis! I think I now know how Penelope felt!

I have a nasty case, but unfortunately, my needles are in one country, I’m in another, and my stash is in storage! I’ve been picking away at a sock, and drooling over patterns…

That’s the worst kind of startitis–when you’ve got it and there’s nothing you can do about it.

I just finished a baby blanket and pillow (miles of stockinette, ugh) that had turned into a major slog. I have been so looking forward to projects that are actually enjoyable. So what did I wind yarn for yesterday? Purl Soho’s Hudson Bay Inspired Blanket. SMH. Also, Hadley Pullover and Apres-Anything Socks. I’m also obsessing over Squad Mitts but am afraid the selection of yarns from stash would be like falling down a rabbit hole.

Urgh. Yeah, I’ve got a case of startitis. I’m trying to keep it under control (six projects isn’t too many, right? that’s one for each day when I have time to knit), but. There’s two sweaters, an afghan, two wraps and a hat. I did frog one big project, and I am avoiding the Hadley KAL (I don’t wear big wooly sweaters). But I just got Kate Oates Grown, and there’s a sweater in there that I’ve been wanting to make for a decade but didn’t want to futz about modifying a pattern (more than I usually do).