Wracking my brains trying to figure out why the stitch count after putting the sleeve stitches on waste yarn is 40 stitches less than it should be.

The pattern gives you a number for the stitches that remain on the needle after the sleeve stitches are taken off, but it doesn’t count the 40 raglan stitches.

Am I missing something?

Oh hooray! I searched for errata and didn’t find anything so I figured it must be me. Thanks so much!

It also seems that the numbers at the end of the yoke shaping are wrong. It seems that in once you get to the end of shaping the yoke, you have a stitch count that makes sense with the work you’ve done so far. For example, for the first size, you cast on 104 then increase 12 stitches 21 times (252) which gives you a total of 356 stitches which is what the pattern says. BUT, it also says you have 106 stitches each for the front and and 52 each for the sleeves. That only totals 316 stitches - 40 less than what you have on the needles. It appears that numbers for the front and back should be 126 each to include the cable panels. I checked the other sizes and they were all off by 40. 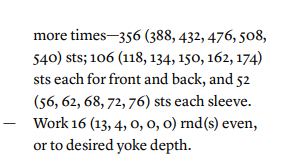