Looking at squares and log cabin I fell for this seemingly simple pullover from Filati Classic-but only in GERMAN,Has anyone seen a similar pattern even if all straight so I could modify to squares?
Also Romanian patterns are high fashion and exquisitebut I can't read a one. Thank you! 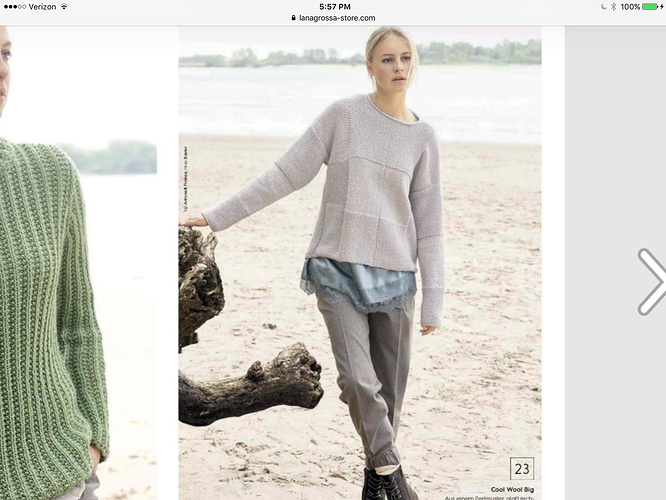 Love that sweater, but alas, don’t speak German either. Have you tried any of the online translators. They generally don’t do a very good job with knitting terms but it’s worth a shot.

What’s the name of the pattern? Maybe we could figure it out.

From what I can determine it is from FILATI CLASSICI No. 13
And it is pattern #23.

I went to the Ravelry “Groups” tab and searched using the term “pattern translation.” The first one that popped up was a group called Excuse Me? The description says “The Excuse Me? Group is a place where Ravelers can ask other Ravelers for help reading/understanding anything that is not written in their native language: patterns, ball bands, old family papers, advertisements … you name it!” Have you tried there?

Thank you-I just went and joined. Someone did offer to translate from
German. But I just can’t justify spending $18 (only comes in hardcover
book) for one pattern:(

One thing I’ve learned about knitting patterns from foreign sources is: it’s good to be sure that at least the tech editing is done by a knitter who is also familiar with English knitting. There is a French designer that I love for baby clothing. Her patterns are well-designed and clearly written, but once in a while something slips through. I was knitting baby booties and the pattern read Row 1 Knit, Row 2. Knit etc., clearly garter stitch. However when I looked at the picture the booties were just as clearly knitted in stockinette. I mentioned it to my daughter who teaches French at university and spent a year in France. She said it was probably translation/editing mistake because French has no word for ‘purl’. A French knitter would have known to ‘purl’ back to make the stockinette. In another French pattern (a different designer who obviously did not employ an English tech editor) she referred to the seed stitch, which to me is K1P1 on one row and P1K1 on the next. But this seed stitch was a pattern over 8 rows of mostly knit with a purl stitch every 8 stitches, followed by 3 rows of stockinette, followed by a row with a purl stitch every 8 stitches, offset from the first one. Quite a difference! The same pattern also said “Knit to neckline border” for the front right side of the little jacket. Since there was an established 3 stitch garter border, I didn’t know whether this meant knit to the border or to the end of the neckline. My daughter had already made this and had to go back to the original French to figure it out. When it said neckline border it meant all the way across. There were things like this all through the pattern. It wasn’t poorly writing but obviously it hadn’t been edited by a person familiar with English (American) knitting who could have translated the intended meaning instead of just word for word.