The Swatch Doctor Is In!

Are you worried that you are wishfully counting your swatch?
Do you think it’s possible that you are getting the gauge you want to see in that swatch?

This is a place that is free of judgment but full of honest counting.

Post a photo of your swatch with a Susan Bates Knit-Chek, a ruler, or a measuring tape laid upon it.

DO NOT TELL WHAT GAUGE YOU ARE LOOKING FOR.

Wait patiently for people to count your gauge and tell you what they think it is.

Carry on in the light of this information. 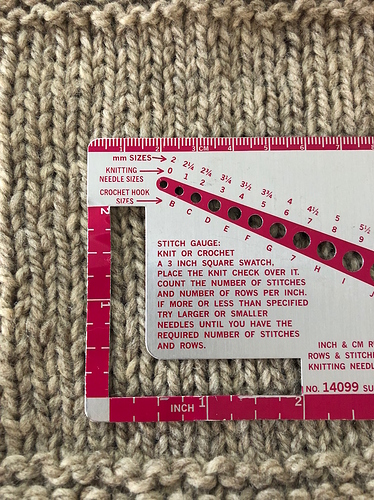 I am so excited about this. I was planning on putting up a post tonight about swatching for a pair of boiled wool mittens! I’m at work now (shh!) but will put my pics up when I get home.

My count is the same as yours.

Because I’m so new to knitting that I’m not sure I know how to count stitches accurately, I’d better keep the different numbers I thought I saw to myself. All I can offer is something I found just a few days ago about swatches and gauges:
http://www.twistcollective.com/collection/107-articles/2524-patty-s-purls-of-wisdom-2
When I get up enough courage to knit something, I’m probably going to try swatching for gauge Patty’s way.

Seven and a skosh because there’s a little space on each end. Would be better to measure over 4 inches, just sayin’. Good luck with the little liar!

recently did a project that was layette (hat, sweater, blanket) for a friend of a friend. It was really close to Christmas and I had less than a month to do it but I agreed to it because the couple who were having the baby had tried for 10 years and I’m a sucker. The pattern is Korrigan which is a favorite of mine. I’ve made at least six of the blankets but never the clothing.

Seriously, the whole time I was knitting the sweater I knew something was wrong. It was stiff, dense and way too small. Checked the swatch again and kept on going. It was like 1984 when no matter how many times I watched the Wake Me Up Before You Go Go video, I still believed George Michael was straight. Seriously! His hair was better than mine and Yonkers was the epicenter of 1980s hair. Mine was fabulous.

I was on schedule. Got the blanket done (which is a heavenly baby blanket) and did the hat on a slightly larger needle because babies have huge heads. That’s when I had a horrifying moment and realized I had to rip out the whole sweater and re knit it. The yoke on this beautiful little tiny sweater is a solid 13 hours of knitting. There are at least 200 cable crosses. Suffice it to say that my right thumb is now svelt.

Keep in mind that it was the Christmas season so I also had family gifts to get done and 2017 decided to go out for me with its middle finger in the air. We had an explosion and fire at work (so proud of our team–they were awesome); a cousin’s mental illness led to a bad suicide attempt on Christmas Eve (he survived and will get the help he needs); and, another cousin got arrested by the Feds for a horrifying crime (I have no sympathy–he can rot in jail). None of this is “normal” in my world so perhaps my refusal to accept that my gauge was wrong was just straight up denial.

The whole time, the swatches all said I was on track and a-ok! So, size matters. A larger swatch would have given me a much better sense of what the final fabric was going to look like. And if I had followed my gut, I wouldn’t have knit a whole damn baby sweater that I knew was wrong.

Brioche! It’s so stretchy, and seems to be a different gauge every time I look at it, depending on how it’s been handled. Here are a couple samples. 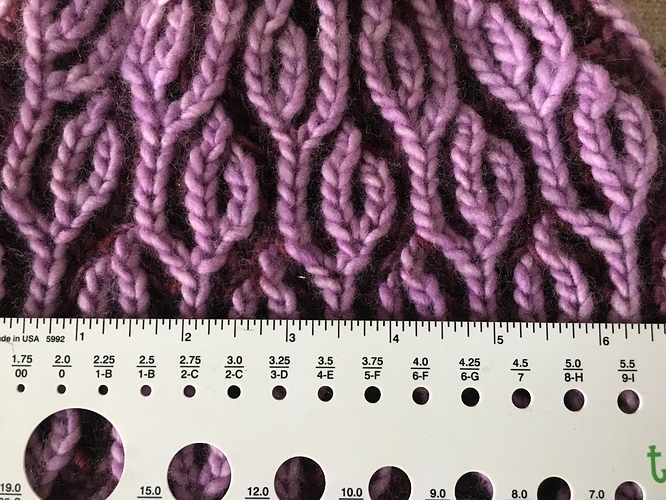 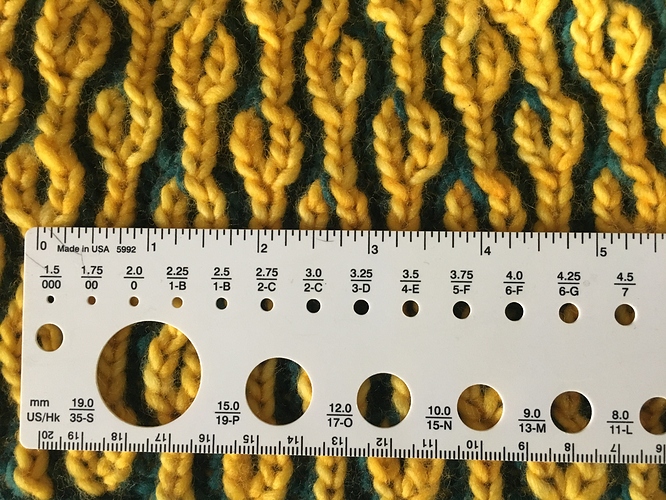 I know what I’d like to call the gauge, and it was that yesterday, but today it’s different. Of course. What do you see for these?

I agree that Brioche is very tricky; it grows as the day goes on, too.
When I teach Brioche I base the project (a simple 2-color cowl) on their stockinette gauge and hope that the students don’t strangle the BRKs and BRPs 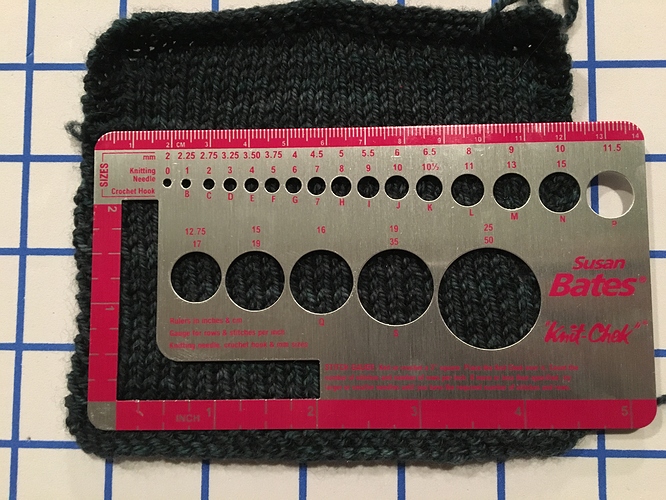 First was top. This is the bottom. 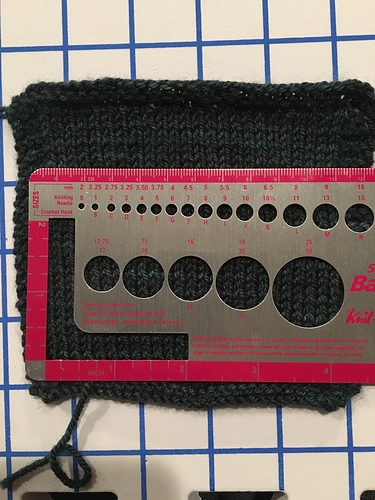 And 16.5 rows so 8.25 per inch. The rows were a little swervey (is that a word?) so maybe move the window over a bit to get a nice straight line.

This is a little bit different than a traditional swatch measurement. I’ve become strangely obsessed with the idea of making boiled mittens. (Hmm…think the current temperature may have something to do with it.) I did a little research and only found one traditional pattern. Problem is, the math in the pattern doesn’t make any sense to me. I’m supposed to make the mittens on size 4 needles over 48 stitches. They’re also supposed to be 1/3 larger than I would normally make the mittens to account for the boiling. They gauge is five stitches to the inch and I am using a very good equivalent to the suggested yarn. Not working out in my head.

So I’m doing a science project. I knit two swatches on the suggested needles and the stitch gauge is really, really, really close. It’s literally a hair under 5 stitches to the inch. I wouldn’t have even noticed it if I hadn’t taken a picture. There’s no indicated row gauge. There are two swatches because I’m going to boil one in plain water and one in salted water (1/2 cup to a gallon). I made intentional mistakes in the garter border so that I can tell them apart.

The swatches are already pretty sturdy. I’ve got 20 rows measured at 2 5/16 inches. I’ve taken into account that the ruler isn’t quite lined up right and the stitches marked with the pins are row 0 and row 21. There are 20 stiches between the garter borders and I’m getting 3 7/8 inches there.

I’m looking forward to seeing what happens. I’ll be back once they’re dry. 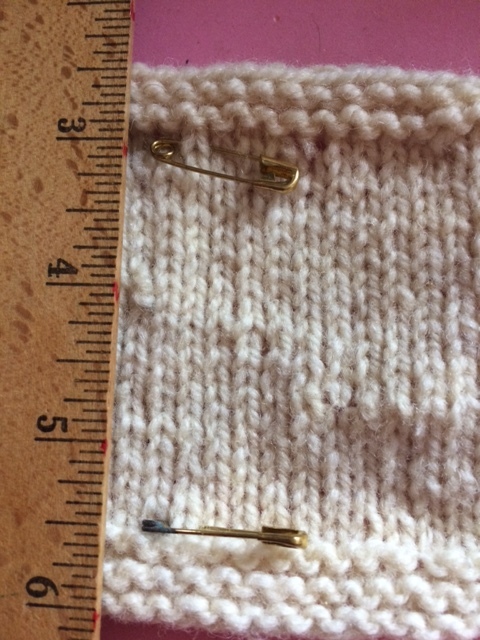 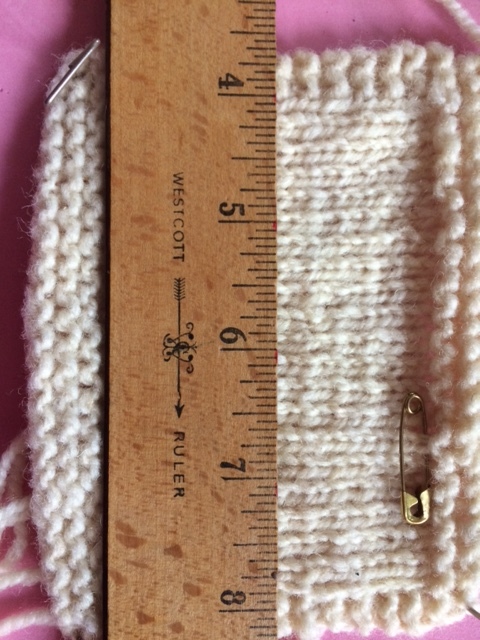 Thanks, Nell! That’s what I see, too. At least for now. They’re hats, and brioche is so stretchy, I’m guessing that as long as they’re small enough they can always get big enough! They both stretch to fit my head.

Thank you! I meet up with a girlfriend at our LYS and got additional eyes - following the suggestion of straightening it and getting a more central reading. Much appreciated!!

Loving the yarn. What is it?