Game changer! Jen Arnall-Culliford’s very simple technique makes your Fair Isle patterning pop against the background. It’s all in how you (consistently) hold the yarn.

Well. I have something to say!!

This tutorial has just saved my life! Not literally, of course…, but then again, have you ever been on the wrong side of a rampaging, furious college age daughter? It’s not a pretty sight, let me tell you, ugly crying and everything, lol!

My eldest FaceTimed a few days ago, frantic, and said that her undergrad roommate has just announced that she’s going to have her first child (drumroll here) IN THREE WEEKS!!! And it’s a boy. Thank goodness she did get that little chunk of information, as I am ROFL! And I am laughing because said roommate is a) in her 3rd year of med school and the dad is in his intern year, b) neither one of them is usually home and awake long enough for anything but 40 winks, I thought, and c) both of them thought she was just acting weird and her clothes fitting badly because she sprained her ankle in the last marathon she ran in October and has had to keep her weight off of it since then and it’s the first time since junior high school that she hasn’t been running at least 20 miles per week.

Funny how things work out, huh? Evidently, Baby William, who will be known as Liam, after a few family members including my grandfather, will be getting a medical degree along with his parents. And I have decided to break out my Tin Can Knits, 9 Months of Knitting and knit the very studious and IMO doctor like vest pattern “Peanut” that I’ always been afraid to try up to now.

But between the intarsia and this tutorial, here goes nuttin’ my dearies! 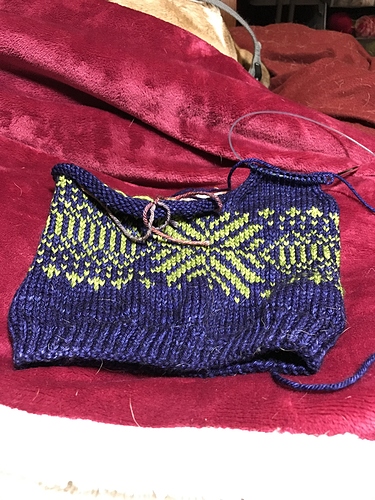 So I have tested my theory, x2, and it’s inconclusive to my eye. But I like the result so I will keep doing stranded colorwork this way!

That’s a great question! I held the same color dominant all the way up, even though changing it halfway does make sense… If you’re happy with the result then that’s the best answer.