This was an investment I had to contemplate - I did gooood - great investment - no regrets. I love these needles above all others I have knit with, ever.
I do have a question about the L shaped lavender tool included in the set. It is cleverly designed to include many useful features, but the two little holes right under the cutter blade stump me.
Can someone tell me what they are used for?

I’ll have to look. I’ll confess that I never noticed that the l shaped tool had a blade. What a dolt I am!

I’m thinking it is to help “seat” the cutter, but potentially to feed the yarn through, but this is a total guess.

Me too. Do you have access to one or shall I send a photo??? You will know the answer I’m sure.

Can you tell me if you can take the Tulip Set on the airplane?

I’ve not had any problems, are you flying International? That’s where I’ve heard varying reports.
Happy Travels.

I agree with Nell. I’ve not flown internationally since I’ve gotten them, but I’ve not had a problem in the US. Internationally it is airport, and sometimes screener, dependent, but since the have the stoppers, I think you’ll be ok.

Thanks. Just Chicago to LA

Yarn Harlot, who travels a lot, says she has never once had a problem with knitting implements.
I still generally don’t use bamboo or wooden needles when flying - would hate to lose my expensive ones. Just in case.

Ah, that should be "generally ONLY use bamboo or wooden…
Blush 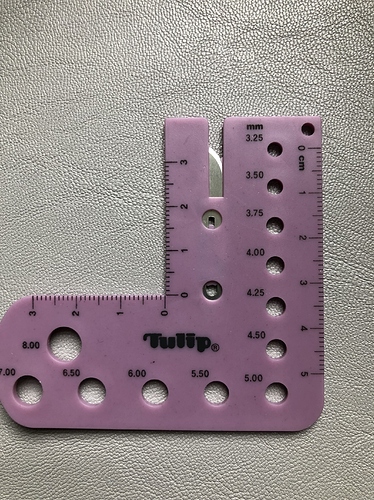 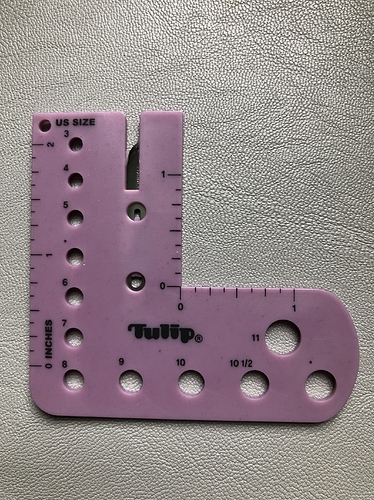 IMG_8498.jpeg2138×2851 2.64 MB
I thought at first the holes were there so you could wiggle the blade out if it needed to be replaced, but the end is sealed, so I think it has just a one time use to center the blade when they put the thing together in the factory.
I’m uploading photos of both sides for anyone else who wants to take a guess.
4 Likes