Is anyone else doing this? I just read about it, and I have been wanting to try waffle stitch for a while. You have to cast on MANY stitches, wich is a great way to practice what MDK wrote about in the blog yesterday.

Here is some more info 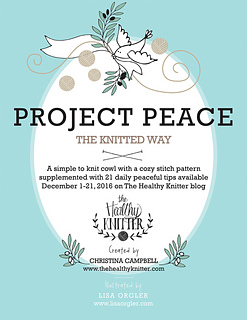 Waffle stitch is one of my favorites for sock-legs when I’m in the mood for simple and smooshy. A very nice stitch pattern!

I have the pattern and just need to decide on the yarn. It might end up as a Christmas gift.

Glad you posted this here, as I hadn’t noticed the pattern update was up! I’ll be knitting along and the cowl probably will end up in the gift pile!

Oh, wow, I wanted to do this, but I thought that there wouldn’t be a pattern update until December 1st. Thanks for posting this, so I can hop over and get my pattern update and get ready to start.

What a lovely idea! I’ve got a couple of other projects on the needles, but am making way for this one too!

So fun to see others join!

What yarn will you be using? I have some turquise knit picks palette that was gifted me 4 years ago. I plan to finally use it! Not sure if its a gift yet.

I’d love to join in. This will be my first KAL and I like peace! Thanks.

Have the pattern and have cast on. Used long tail cast on as suggested and took 3 tries to get the correct number of stitches without too much left over. Like the idea of a row a day.

I signed up a week or two ago but didn’t expect to get started until December 1st. Thanks for the heads up. I have printed the pattern and now need to decide between two blue yarns. A Knit Picks sock yarn or Malabrigo Silky Merino, both from stash. I will need to do some math if I choose the DK weight Malabrigo. This will be for my 16 year old niece for Christmas (whose favorite color is blue). Looking forward to the Peace.

I think its 4 rows a day, but its one pattern repeat pr day.

I also signed up weeks ago and was going to check in the morning.
Without getting into it, I love the idea of this widespread collective of peaceful thoughts accompanying loving hand motions going on every day.

I’m in too. Am casting on tomorrow morning which means I have to find some yarn tonight! Good thing I have a ridiculous stash. I think I am going to combine this with some self care–while I’m working on this, it will be my quiet time and nothing else (unless I choose to add something else in). A little forced meditative knitting will do me good.

Thats a great idea! Some mindfullness peacefull knitting time! I might do that as well! Tea and knitting and me-time.

I hope to see some pics in this thread tomorrow!

I went to Ravelry and got the pattern. Gotta do some stash diving to see if I have something that’ll work. However I need another project on needles, not. I think I’m going to try it anyway.

I’m going to use an I-cord cast on as mentioned in the Ravelry thread (there is also a video link). I’ve done I-cord cast offs and edge applications plenty of times before, but I had not tried this particular cast on.

The designer mentioned that the second time she knit this cowl she didn’t have enough yarn (one of her skeins of Loft was a bit light). Since I want to have I-cord on both edges, I plan on casting on fewer stitches if I have less than 550 yards. I will also do like a few other knitters have done and weigh my yarn before and after the cast on to make sure I put enough yarn aside for the cast off.

I think I’m going to use my MDK Rifton gradient - it’s the perfect weight and it has enough yardage for this pattern.

I have a casting on trick that I learned from Gudrun Johnston that works great with a long tail cast on when you don’t want to have too much yarn left over. (It could also work with other cast ons, but long tail is where I typically use it.)

Cast on with a fairly short tail - enough to cast on about 10 stitches and have a long enough tail for weaving in at the end. Then, unravel the 10 stitches you cast on, making sure to keep one hand on each end of the yarn that was used in the cast on (so, one hand on the start of the yarn tail and one hand near the first loop) - the yarn between your hands is the amount needed to cast on 10 stitches, so you can use that to measure off how much yarn you will need to cast on all stitches for your pattern, plus allowing for the weaving in tail, and you know where to make the slip knot for your first stitch.

I hope that makes sense - it probably makes more sense visually than in words, but it does work. 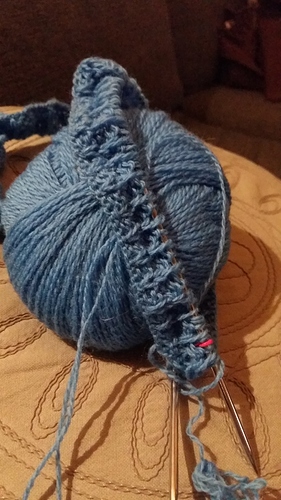